Talking about inspirations, there are sooo many things that influence me in every part of my life. I could say, the religion, attitude, art, even how do I look. Cz you know, we couldn't be genuine unless we mix and match the experience in our head to be something new, something that genuinely describes ourself. So here are some of my inspiring stuffs: 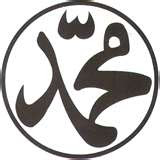 So proud to be his ummat. And I really wish that I and another Moslem in the world could share the same inspiration. Amen.

These are what my mother has drawn in her booknotes. I fell in love in sketching and drawing since then. And up until now, I love to sketch waaaaaaaaaay more and more. Thanks to my mother. :)

I imagine if only I didn't open my eyes at this stuff. There are waaaaaay many netizens that inspired me. here are some of them:
diana rikasari
deviant art
who what wear
style-arena
and many more..... yes I love style! 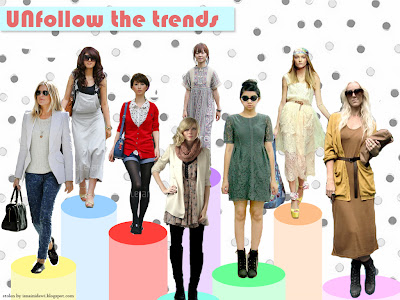 “Kuda renggong” is a cultural performance comes from a town named Sumedang, located in West Java, Indonesia. According to its etiology, “kuda renggong” means “dance horse”, literally. But you can’t consider the dance as modern or pop dance (of course it’s not. :P). The dance performed usually a traditional dance which is built by traditional instruments like “kendang”, “gong”, “suling” and “bajidor”. (More about these instruments.) The song played here is a traditional song especially sang in bahasa Sunda, sometimes in dangdut. Although it’s told that the horse dance, the horse isn’t really dance, it’s just nod its head and legs repeatedly, which is, unique to watch and it’s need more than a tamer to train it.
While it’s dancing, the horse was accessorized by several kind of cloth. This cloth usually applied with sharp colors such as bold red, bold green or gold. Performing in a circumcision traditional party, especially around the Sumedang area, this attraction usually held like a parade. The horse will be dancing in the front line - with its tamer, the kid who circumcised will be riding the horse (actually, he’ll just sit on the back without driving the horse because the horse still with its tamer), the instrumentalist will walk on the left and right with their instruments handed (it’s weight, I’m pretty sure), and peoples will follow them. They dance, too. This parade usually held in a round, forwarding from the kid’s house to another not too far place, and then they back again to the house to bring on another show.
Since they’ve arrived to the starting point (the kid’s house), after some rest, they go to a wide place to bring another performance on. Together they will perform some moves and attractions, as we can see in many circus shows. The horse will act as it was disturbed and fight with the tamer. The tamer pretend that he was crumpled so the audience will horrified – but it was just an act. The tamer then could lead the situation –after some dramatic struggle, and then everyone relieved, with applause given to the performer.
The exciting point of this performance is, you’ll be allowed to try to ride the horse (once again, you don’t really ride it, you just sit on its back) with a tamer controlling the horse, holding the bridle and make the horse dance. It’ll give you several rounds to go and the tamer will claim you the tip. 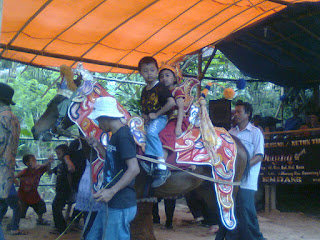 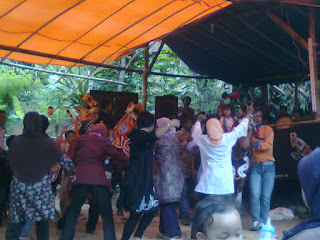 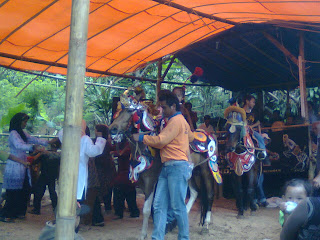 FYI, the big parade is also held at least once per year. In this big parade, you won’t just see one to three horses, but it’ll be many more of them. This event usually held on several dates. Especially on some of big days, such as the town’s anniversary. So if you happened to come to the town, I think you may probably wanna see the event yourself. It’ll be so exciting. :)
October 2 2010
Regards,

Dewi.Isn
Posted by D. Isnaini Fadhilah at 3:00 AM No comments:

I really mad of them:

Hail to their new album: A Thousand Suns. Despite the change (slightly change, if I must say) in their style, over all, it's just good for me. The Messenger is one of my favourite song in this album. The lyrics just punch my mind. Gee.. here it is:

where life leaves us blindlove keeps us kind

Sweet don't you think?
Posted by D. Isnaini Fadhilah at 12:57 PM No comments:

Email ThisBlogThis!Share to TwitterShare to FacebookShare to Pinterest
Labels: to Listen

So...this is my blog. As you can guess from the title, this blog will contains everything that I myself categorized as art (so something that you may not like, is an art for me. hee hee). And yes, I'm a chemist who graduated from a chemistry university in Indonesia. But I LOVE ART so much! Well then, please enjoy my page and don't be hesitate to send me critics or advices.


Isnaini.Dewi
Posted by D. Isnaini Fadhilah at 12:08 PM No comments: